conceived and performed by Federica Tardito and Aldo Rendina 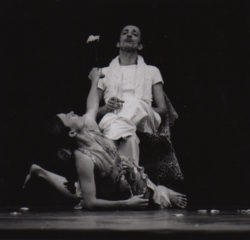 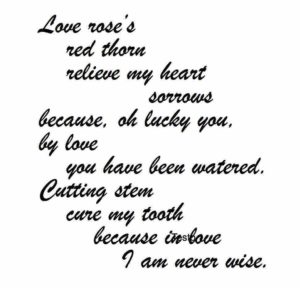 A self confident man‚ tough as his seat‚ hombre pasionado which confuses Love with violence‚ an offended woman‚ exhausted‚ watered with her roses‚ longing mujer which soffers violence for a little touch of Love; they have been living together for “thousands of years” bringing up roses pressed by nightmares that seem dreams and watered down poetries‚ they share an unique reality: to dance old memories in tired dresses.

Gonzago’s Rose is a funny scenic action based on the couple’s boredom, where he is the Sicilian macho and she is the victim lover: the comic quality remembers the gags, but the sequence of the massage made on the beach in a flamenco and bullfight stile is a piece of anthology.

An ironic and, at the same time, passionate dance which leaves space to the love’s great feeling and to everyone of us dream, a dream in which we fall in love listening to old songs and handing a flower to the woman we love: maybe a red rose. The two Gonzago’s Rose’s interpreters come from various professional experiences, with dancers of great level, such as Anna Sagna, Roberto Castello, Giorgio Rossi and Raffaella Giordano, dancers that at the moment have an important role in the world of dance.

Its an effective and original branch from the Sosta Palmizi the Gonzago’s Rose made by the really close couple Federica Tardito/Aldo Rendina.

A performance showed on the stage by an exceptional duo, Federica Tardito and Aldo Rendina; irony, playing sensuality, tragicomic tenderness – which put together an impeccable technique – spice a  show that wants to probe the relationships between man and woman and the couple’s incommunicability trough an infallible and original strategy: make the audience smile while they are reflecting, bringing the attention on a real problem disguising it, as if it is a just a game without importance. The Spello’s performance spots on the first meeting between two dancers that will have a bright future.

Gonzago’s Rose is made by a nice couple of “nutty” people, the dancers and choreographers Federica Tardito and Aldo Rendina. Reckless, cheeky and eccentric genoius enough, they venture into the depths of  a man and woman relationship. He is an olive “terrone”, rough and dishevelled. She is a buttery Rosalia from the profound North, a woman that, tired of offences and frustrations, takes refuge in her poetries, dreams and roses world. On this tram that lost desire sneers and teases are burning out, helped by the wild rhythms of Goran Bregovic, the Mina’s “Porompompero”, an impetous Prokofiev and the rough and disenchanted comment from Paolo Conte in “Una giornata al mare” (“A day at the sea”).

Among floating basins, roses which are used without excluding thorns, “tired” dresses and hilarious gags the Gonzago and Rosalia’s story sorts out, a story that strucks the audience with irony, but that also constructs at the same time a dramatic crescendo that has a great impact.

… they are two radiant examples of the “Turin hatchery” in the theatre and dance section, with a curriculum full of professional experiences both in Italy and abroad, in cinema and in theatre.

An intense show, full of atmosphere, emotion and to get emotions.

Gonzago’s Rose, made by Federica Tardito and Aldo Rendina, has become a little cult show, which has been invited, this summer too, to many trend festivals.

Gonzago’s Rose was born from the meeting between two artist who live in the same city, Turin, that, after a period of nomadism, felt the desire to do something together, to construct their work, to put together their way to mean dance and theatre, but also to mix the two languages.
Where did the idea to investigate the couple relationship come from? We just tried to isolate some peculiar elements and the strongest one, also because of the components of our company, was the relationship between man and woman. We were interested in showing up the missed promises, the silences after an entire life has been spent together, we were interested in the relationship’s stereotypes. Everything played  with irony, laughing is the alter ego of sadness. Rosalia and Gonzago are two souls living a conflict, two souls lost in the life of a couple.
And the roses of the title? The rose is a metaphorical flower. Lets says it is the third element of the game. Fascinating, fragrant, the rose is also the thorns’ flower, the flower that pricks.
Where did the choice to work in the theatre and dance (teatrodanza) come from? We are not pure dancers, the use of the word mixed up to the danced movement has been a need more than a choice. The words come out just as naturally as we have the need to transform movements into choreographics designs. While we got along with this need we also researched for simplicity. We want the couple’s story to arrive to the audience, we want it to be a simple one, in which everyone can recognize himself or that he can share.

Places where Gonzago’s Rose has played