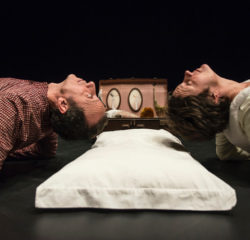 Eolo Awards 2015 as best show in kids and youth’s theatre category
“In the show the dance of Aldo Rendina and Federica Tardito, nourished by a few but significant words, meets with the music expressed by Friedrich Edelmann bassoon and Rebecca Rust cello to narrate children, through a poetic and engaging way, the very special meeting of a duck with death. Two instruments, two totally different sounds, that talk softly and intensely with one another and with the bodies of the two dancers, create a clean and light choreography, veined with irony that literally enchants not only children, properly suggesting a subject too often denied to their emotion and considered a taboo that must be avoided.”

Special mention Osservatorio critico Festival “Terres Communes” – Turin
“It is reported to have the ability to tackle a deep and hard topic in a delicate and poetic way. The show mixes dance, theatre and live music by creating an immersive atmosphere, light and capable to go trough different registers. The actors-dancers play the characters with unusual and remarkable naturalness.”

It was from a while that duck had a strange feeling.
“Who are you? And why are you following me everywhere?”
“You finally noticed me,” said Death. “I am Death.”
Duck was frightened. No one could blame her.
“And now you came to get me?”
“I am close to you since when you were born – just in case …”
“In case?”
“Well, … in case something happens to you. Never know! A bad cold,
an accident …”
“And are you going to think about the incident?”
“Life thinks about that, as well as about a common cold, and all the other things that can happen to you ducks. I’m just saying: fox!”
Duck did not even want to think about it. She felt goose bumps.
Death smiled at her in a friendly way. Basically she was nice, if we exclude that she was
what she was. Indeed, very nice.
“Can we go to the pool?” asked the duck.
It was what Death feared.

The encounter between duck and death is a story with an inevitable ending, but unexpectedly fun and light. Primary it tells a simple thing, and that is that death accompanies us since we come to life and that to understand it will help us not to be afraid, to feel less alone and maybe to live more con- sciously.

The strange and unexpected friendship between duck and death is told primarily through a choreo- – graphic language, thanks to the bodies and movements, but also to the voices of Aldo Rendina and Federica Tardito. A staring, funny and poetic theatrical duet that finds on stage his ideal musical ma- tch in the unusual pairing between bassoon and cello.

“This show has got one of the most interesting results seen in Turin this year… What a beauty! We believe that staring tenderness and poetry of two friends playing together, for the entire life, to the end, is a beautiful and soft way to start to give death its natural appearance, from an early age.”
(Elena Maestri, www.eolo-ragazzi.it)

“Inexorable, yet funny, sometimes comic … An affectionate tale, to suck slowly, to meditate, if you want, for a long time.”
(Maura Sesia, www.sistemateatrotorino.it)

“And now you came to get me?” asks duck to death. Her answer is both simple and illuminating: “I am close to you since when you were born .”
From this terse statement comes to life the idea of the show, that tries to imagine a world before
the beginning of the story in the book, when the duck still lives “without” Death, not conscious of her inescapable presence. Basically, it is an experience that we adults know well. Up to a certain age, time seems to be only an abstract category, abundant merchandise, unnecessary, unimportant, expandable up to capacity. Then, suddenly, something clicks and the perception that we have about it radically changes. Time starts to flow, faster and faster, and it seems never enough to us, lost in our daily lives. There are so many things to do, to finish. Duties, obligations. Successes and pleasures. We advance dispatched or trudge, but in the end it does not matter, sooner or later we get stuck, we raise our head and we find, amazed, that the journey is about to end. So, to live accepting death can also mean this: to sometimes stop, and to look for a time, a fairer rhythm, without getting caught up in the frenzy – occasionally misleading – of life.

The show brings together two dramatic visions often unnecessarily contrasted: a narrative one and a exquisite concert one. On the one hand, therefore, there’s the need to tell a story, Duck and Death tale, of course, and on the other hand, however, there’s also a clear desire not to put the music to the mere service of the narrative, but to use space and stage movement to give a body to the music, to make it “visible”. Music which in this case is the one which arises from the unusual encounter between a bassoon and a cello. A duet between two deep voices, funny and poetic, that is able to express all the variety and colours of human feelings.

Brief moments of prose are a counterpoint to a music system purely concert. The scores, written specifically for bassoon and cello by W. A. Mozart, H. Gal, L. van Beethoven, G. Bizet, P. Hindemith and K. M. Komma, are performed live by the virtuous Friedrich Edelmann and Rebecca Rust. The task to be the glue between these two worlds is left to dance and scenic movement, in this case to the brilliant Turin duo formed by Federica Tardito and Aldo Rendina.