Circhio Lume drama-dance performance on the border with the clown 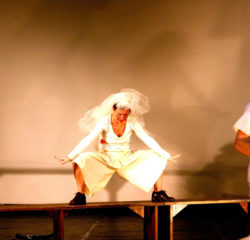 Three faded clowns, in a delirious and funny circus, are gambling everything to gain the centre of attention.
From a look at the mechanisms man puts into action to make people love him‚ to be the centre of attention‚ one enters with lightness and detachment the tragedies everybody lives‚ showing the pretexts and the lies created by the not understood victim.
A not narrative but a circular writing‚ which uses a language hovering between the tragic and the grotesque‚ a bit exaggerated and clownish.

We started from the desire of confronting and recognising in ourselves the mechanisms we adopt to be loved and which often trespass on the staging of a tragedy which always repeats itself…
To do that we realised we had to work hard: we had to learn to recognise the ideas we have about ourselves without following the judgement.

The body – the ideas

We have been training for a long time to transform ourselves‚ to widen our borders‚ not to identify with the form. If you identify with the emotions abandoning yourself to an idea‚ that is to say to that feeling which is purely mental‚ there is the danger of remaining obliged…
If you let this happen the space will shrink a lot‚ even the bodily one‚ and it is a sensation which doesn’t contribute to the freeing of the creative act. We need space to act.

At a certain bitter point of our work we noticed that we had started from an idea and that it had remained the same. so how could we make our longing concrete?
We realised that we had to create a relation with an audience in that moment invisible and allow ourselves to act an unmasking: “I come here in front and I show you that I‚ I‚ I‚ I build and feed the lie…”

A journey in a continuous balance in the attempt of staying with what was‚ being the “creators and the creatures”‚ “the witnesses and the testimonies”.
At the same time we had to set a mechanism in motion which was ours making it visible on the outside. Activating all the energies with the only aim of making people love us.
In order to penetrate into the areas of shade we had to turn on the light several times choosing the way of a saving humour…
During our job we used the words “poor little me” for that part of us which will never feel loved enough and will do anything to be…
The more I feel nobody and the more I make an effort to show the opposite… the more I fall and the more I want to fall again… the more I shout and the more I want to shout…
We think it’s fantastic to disclose it publicly as it contains a strong chance to change into a ridiculous drama.

“A funny and delirious circus‚ which intelligently plays on the razor’s edge of a declared‚ evident‚ devastating idiocy.
The creation (at Volterrateatro Festival 06) was welcomed by an enthusiastic ovation (…) That happened because Circhio Lume is a witty and crazy pastiche‚ pushed to paroxysm.
Really good at their work‚ they bring their hypothesis of non-dance to the dullest and the most destabilizing clownerie’s territories.”
A. Porcheddu
da www.delteatro.it

“Circhio Lume renders the various choreographic scenes small cameos made of a loneliness which burns‚ a wish to be that leaves breathless in a movement’s tension that releases herself in a surrealistic and never ordinary comic quality.
…the characters’ poor souls (…) they are poetic bodies‚ their faces tell an astonishment that strays into terror‚ they are little figures crushed by life.
The Tardito/Rendina Company confirms itself for the choreographic research’s strict precision and proves to be a group that we have to bear in our minds and we have to frequent with the affection of who can just love the ones which are able to show the lyric side of pain and of the love’s need.”
Nicola Arrigoni
da La Provincia

Places where Circhio Lume has played